No state pension increase for expats 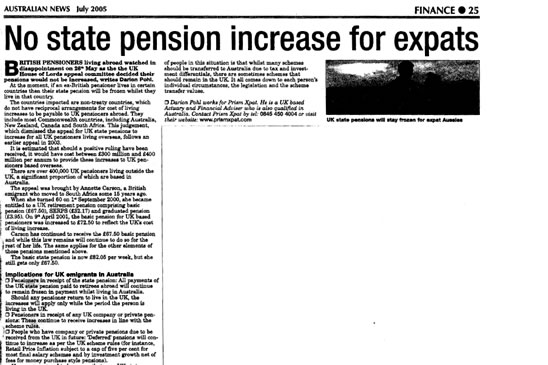 No state pension increase for expats

British Pensioners living abroad watched in disappointment on 26th May as the the UK House of Lords appeal committee decided their pensions would not be increased, writes Darion Pohl.

At the moment, if an ex-British pensioner lives in certain countries then their state pension will be frozen whilst they live in that country.

The countries impacted are non-treaty countries, which do not have reciprocal arrangements for cost of living increases to be payable to UK pensioners abroad. They include most Commonwealth countries, including Australia New Zealand, Canada and South Africa. This judgement which dismissed the appeal for UK state pensions to increase for all UK pensioners living overseas, follows an earlier appeal in 2003.

It is estimated that should a positive ruling have been received, it would have cost between £300 million and £400 million per annum to provide these increases to UK pensioners based over seas.

There are over 400,000 UK pensioners living outside the UK, a significant proportion of which are based in Australia.

The appeal was brought by Annette Carson, a British emigrant who moved to South Africa some 15 years ago.

When she turned 60 on 1 September 2000, she became entitled to a UK retirement pension comprising basic pensioners was increased to £72.50 to reflect the UK’s cost of living increase.

Carson has continued to receive the £67.50 basic pension and while this law remains will continue to do for the her life. The same applies for the elements of those pensions mentioned above.

Implications for UK emigrants in Australia

However, you need to be aware that your UK state pension won’t increase in payment (as well as consider whether you would be better off transferring your company/private deferred benefits to Australia).

There are groups set up in the affected countries who are dedicated to having these state pension rules changed, through political lobbying and supporting cases like Carson’s. They are looking for support from people in the UK.

For more information contact James Nelson of the British Australian Pensioner Association on ann33_james@bigpond.com, or the British Pensions in Australia group.

In a separate media release issued by the UK’s Association of Consulting Actuaries (ACA), based on the ACA’s latest Pension Trends Survey 2005, it was found that 89 per cent of UK defined benefit (final salary) schemes are in deficit. It
equates to deficits throughout UK final salary schemes, on an ongoing basis, equating to over £130 billion.
The survey was completed across 392 UK firms 2.8 million pension scheme members.

Actuaries are the profession responsible for calculating pension transfer values and as such, these survey findings are especially important for people considering transferring their pensions to Australia.

As has been pointed out in previous articles we have written, there can be Bignificant tax benefita (up to 48.5 per cent of the fund) for certain people in transferring their pensions to Australia upon emigrating. However, with a high proportion of schemes facing funding issues in the UK, how can you be sure that any transfer value you receive from your UK pension scheme is fair? If you receive a transfer, which is not fully reflective of your history with a particular company, this can make a transfer to Australia not worth doing in some cases you could be better off leaving the fund in the UK scheme (so long as you understand the risks of doing so and the tax implications). Careful advice is required in all instances.

Our experience in having dealt with significant numbers of people in this situation is that whilst many schemes should be transferred to Australia due to tax and investment differentials, there are sometimes schemes that should remain in the UK. It all comes down to each person’s individual circumstances, the legislation and the scheme transfer values.