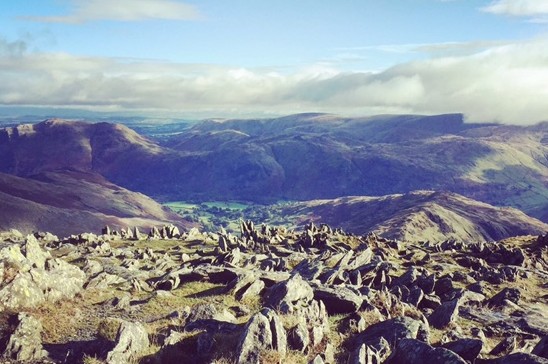 Prism Xpat contributes to charity each year. As part of our involvement, last weekend our CEO, Darion Pohl, climbed 24 mountains (including England’s highest) for a good cause. His description was as follows:

It was 4am. The alarm clock rang. I had had 2 hours sleep. I opened the curtains and shuddered. It was driving rain. Soon after, we left to climb 24 peaks, including England’s highest mountain. We commenced in the dark. Head torches. 24 of us departed. Horizontal incessant driving rain – which would continue for 12 hours. Strong blustery winds turned our waterproof clothes into cold mush. Sub zero temperatures with wind chill. We all started to freeze. Slippery mossy rocks…. A constant hazard. Very poor visibility. Thick fog. Some people fell. Our experienced guides called it extremely arduous. Some of the group left after 2 peaks. Those that could (including myself) pressed on. A team, step by step by step. We climbed and climbed and climbed and climbed not daring to stop for more than a few minutes to keep warm. Peak after peak after peak. 13,000+ feet of elevation and over 30 miles of walking. 24+ hours of climbing in a 36 hour stretch.

It was a very tough challenge. We were supporting OMS – Overcoming Multiple Sclerosis. Two of the team had MS themselves. They were following the OMS program of recovery and climbing their own mountains. They were inspirational. These ladies, who had on a downward MS spiral, had followed the OMS program and now were at the stage of recovery that they were well enough to press on with us. Their commitment was extraordinary. The evidence of what our fundraising effort meant was right there. The all round teamwork, courage and camaraderie kept us all going that first day. The second day of the two was better weather, which helped.

I completed the trek and made it to the finish in good shape. So did the ladies with MS on the OMS program. What a team. What an effort. What an experience. A great cause. Unforgettable.

Thank you to everyone who helped support my fundraising for OMS – a charity which does incredible work to support people with MS to live much better lives.

For more information about the charity itself please visit: click here